We’re nearing the end of the first half of the MLB season, and we’ve seen a lot of great baseball. More importantly though, we’ve had a number of intriguing story lines that have captured our attention and kept us guessing early and often.

We’ve seen a handful of young standouts take over ball games and propel their teams into new stratospheres. We’ve seen franchises who many assumed were destined for the bottom, overachieve their way to the top of the standings. Oh and we got to see Derek Jeter almost buy a major league team (that didn’t make the list, but I just thought I’d mention it because I love me some Jeter).

Without further ado…here have been the top 5 most surprising stories thus far in the 2017 MLB season:

If I told you before the season that in late-June the top of the NL West would be in a dead lock, you’d have assumed I meant the typical Dodgers/Giants battle. You’d be right about the Dodgers being in first, but sitting along side them are not the boys from the bay, but rather a pair of recent bottom-dwellers.

The Arizona Diamondbacks sit just 2 games back of LA in the standings, and hold the 3rd best record in baseball overall. They’ve been paced offensively by their perennial standout, Paul Goldschmidt, who holds a .332 BA with 18 homers and 65 RBI. It shouldn’t be too big of a shock that they’re in playoff contention, but the fact that they’ve been borderline dominant over the rest of the majors has been surprising to say the least.

If you’re going to tell me you called the Rockies having baseball’s 4th best record through June, you’re 100% full of shit. Nobody knew this was a possibility, and I’m pretty sure that extends to the franchise as well. Prior to the season, questions were swirling about whether or not Nolan Arrenado would be made available at the trade deadline since the Rockies were obviously headed to the cellar. Instead they’ve made a statement and then some. Sadly, Trevor Story hasn’t made the strides expected of him after last year’s stellar rookie campaign, but that hasn’t stopped the rest of the roster from picking up the slack.

Everyone expected an elite season from a young Yankee, but it wasn’t this one. The smart money was on Gary Sanchez who came out of the gates scorching last year with phenomenal power and contact in roughly half a season of big league action. Another safe bet might’ve been on Greg Bird, who had a red hot Spring after spending all of last season sidelined by injury.

Instead though the sites of the baseball world have been fixated on the man, the myth, the legend, Aaron Judge. The Yankee Right Fielder has the frame many NBA forwards long for, but has some how found himself in what I can only imagine is the largest baseball jersey available.

Judge debuted last season after being highly-touted in the minors and delivered immediately by crushing a homer in his first at-bat. He sputtered a bit after that racking up a painful number of strikeouts before succumbing to the injury bug. He returned this season with many unsure of what he could contribute. He began this campaign hitting in the 8 hole in the Yankee lineup (yea, bet you guys forgot about that), ahead of only 5’8 Ronald Torreyes (the visual of the two of them high-fiving at home plate after a Torreyes homer is by far my favorite image to come of the season).

Still though Judge battled from day one, and sits atop the league as its home run king headed into July. Whether or not he is able to sustain his legendary production beyond the All-Star break at this point seems irrelevant…he has been the biggest surprise (literally) in New York baseball in years. 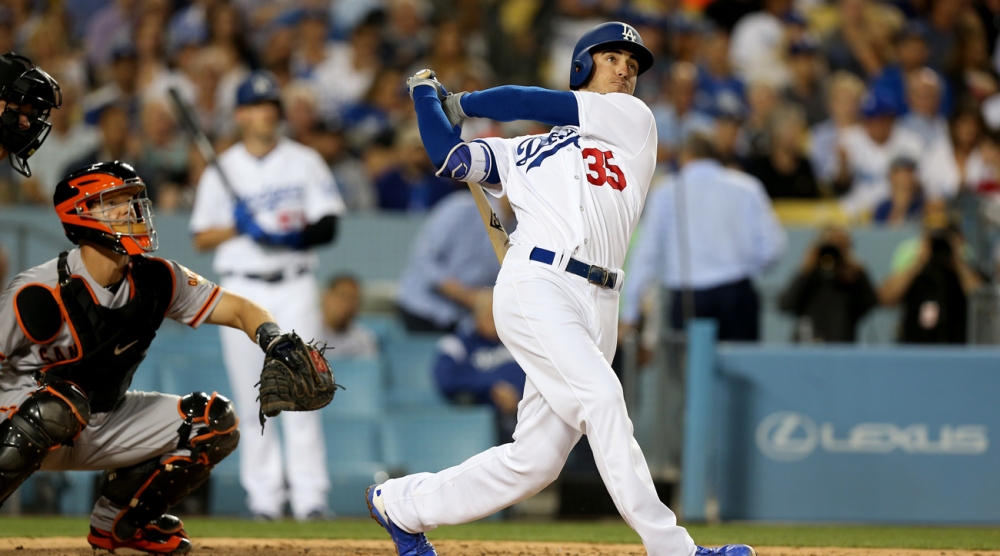 So what were the odds that not one, but two rookies would be the leading candidates to take home MVP honors in their respective leagues. In roughly half the sample size as everyone else in the big leagues, this Dodgers rookie has managed to practically double everyone else’s offensive stats.

Bellinger has been something of a god sent to a Dodger organization who has inexplicably found themselves in the most competitive division in baseball. They were the consensus pick to run away with the NL West at the dawn of the season, but have found themselves in a dead heat with the Rockies and D-Backs. I don’t think that it could be argued, the Dodgers have the best roster in the division as of right now. But both other squads have the type of youth and potential that mean they could sustain this level of play for years to come. Bellinger though, means that the Dodgers future might look just as bright as their present.

I can only imagine how stressful the end of July is looking for LA, as a returning Adrian Gonzalez will likely what his starting first-base job back and lingering trade deadline will lead to a difficult decision.

That being said, we have about 30 days to enjoy what can only be described as one of the best rookie campaigns in the history of the game.

Now we have an instance of a bad surprise. The Chicago Cubs are fresh off of a streak-ending World Series-winning season. They were the best team in baseball a year ago and by many estimations they should have maintained that place atop the league for years to come.

Something looked very different this year however, from their very first steps on to the field on Opening Day. It seemed that the level of fire, and passion, and win at all costs mentality, had dissipated. They weren’t hungry for that hardware the way they were a year ago.

They’ve shown glimpses recently of the fun and exciting team they used to be (and most definitely should still be), such as the laughs and hype surrounding Anthony Rizzo’s love and success from the leadoff spot. But sadly those fleeting moments of happiness in the windy city have been overshadowed by the struggles of some of their core pieces. No everyday player on the squad boasts an average above .270, and their sole bright spot has come in the form of Jon Jay’s production as their 4th Outfielder. Even their pitching rotation, frequently acclaimed as baseball’s best, has been bruised and battered by the rest of the league.

They fortunately sit in 2nd place in their division, but only because of the current abysmal shape of the rest of the NL Central. Once the most competitive division in the bigs, it has certainly seen better days.

If nothing else, when you take a gander at the standings this year in baseball it should give you a sense of hope. If teams like the Milwaukee Brewers and New York Yankees can hold on to leads for impressive stretches, and teams like the Rockies and D-Backs can pose legitimate challenges for baseball’s best record, every organization should feel as though they have a shot. After an NBA season where we already knew the outcome of the entire season before the very first tipoff, this level of shock and intrigue has been refreshing to the sports world.

That being said, it feels as though a number of teams who should be contending have already thrown in the proverbial towel. I mean don’t get me wrong a team like the Oakland A’s who have been shopping around ace pitcher, Sonny Gray, don’t have a prayer of catching the division leading Astros; so it makes sense for them to be open to moving their tradable assets for minor league returns.

Teams like the Pittsburgh Pirates, New York Mets, and Kansas City Royals have already given up on the year despite not being all that far out of the top spot in their division. It has felt like in years past these fringe teams would be pushing hard at the deadline as buyers, instead though they’re content to contend for prospects as opposed to postseason berths.

It should feel almost like a slap in the face to the fan bases of these organizations (and they’re not the only ones: Detroit Tigers, St. Louis Cardinals, and Toronto Blue Jays to add a few more), that in a year where perennial bottom-dwelling franchises are making pushes for October, their teams are adopting the same tanking mentality that has plagued the NBA and NFL.