Believe it or not, it’s very easy to get sucked in to the NBA hype in late June. We just saw the draft take place, and this year it seems apparent that a wide range of rumors and roster moves will shake up the NBA landscape in the coming season. Crazy things can happen at a time like this…you can suddenly start playing your copy of NBA 2K17 vigorously again, you can take to your local basketball court to ready yourself for your own draft moment next year (despite your obvious lack of legit athleticism), or you might find yourself sitting at your computer trying to guess which of the latest NBA new-comers will be making their presence felt early and often.

In the case of a certain devilishly handsome, and temporarily living with his mother, sports writer in the making…it’s definitely the latter option.

So without further ado, here’s my top 3 candidates for NBA Rookie of the Year in the coming season. (Let’s hope this goes better than my Draft predictions…)

Anyone who knows me can definitively say that I am one of the biggest Lonzo Ball detractors there is. I have questioned his shooting form, defensive capabilities, and his overly-hyped playmaking skill time and again. Not to mention the fact that he is frequently compared to Jason Kidd (my childhood hero, and favorite NBA Player) is borderline blasphemy to a Nets faithful such as myself.

That being said, I can admit the kid can ball…pun absolutely intended.

He’s been handed the keys to the Lakers franchise by one of the all-time greats of the game and hailed as the heir to the West-Chamberlain-Kareem-Magic-Shaq-Bryant thrown. This vaults him into two categories right off the bat in his NBA career: either he becomes average (or even just good) and is deemed a bust who couldn’t handle the pressure, or he lives up to and even surpasses the lofty expectations of the LA-faithful and cements himself as a legend.

Now, a recovering Lonzo-hater such as myself cannot bring himself to say that the kid is going to be that next great Laker. But I can concede that he’s going to be given every conceivable opportunity by this franchise to be elite, and that begins on day 1. He is going to be given the rock and free reign of the run-and-gun young Laker squad. And with similar high-potential talent around him he’ll be elevated immediately. No other rookie will be given more of a chance or spotlight to be great from day one than Lonzo, so barring utter catastrophe he’s going to at least be int he running for Rookie of the Year from games 1 through 82.

And if worst comes to worst I like the odds of Lavar Ball fueling the Rookie of the Year until it too comes to fruition. 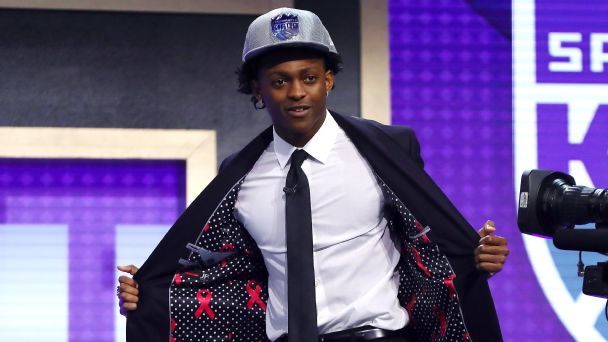 Don’t get me wrong, the Markelle Fultz-Lonzo Ball rivalry might one day be the greatest thing since Magic-Bird with the high-potential rooks meeting time and again in the Finals. Until their teams are ready for a trip to the big-time though, De’Arron Fox is the only Lonzo rival I’d care to discuss.

Not only is there legitimate on-court beef to be settled between the two (stemming from their clash in the NCAA tournament, and months of trash-talking that ensued), they’ve been drafted into the same division. That means at least 4 times a year we will see these two go at it on the hardwood.

Much the same way as Ball, Fox will be given ample opportunities to shine from the opening tip of the NBA season. The Sacramento Kings roster is comprised almost entirely of young athletes waiting for their moment in the spotlight, and the former Kentucky standout will give them the kind of leader they desperately need.

His sheer athleticism will always make him a threat at the offensive end regardless of how long it takes him to develop a consistent outside-shooting stroke. Additionally his playmaking ability (though not as highly-revered as Lonzo’s) is already pretty fine-tuned, which will see him rack up the assists in a hurry.

Truthfully though, his defensive prowess could very well lead to the 5th overall pick taking home the Rookie of the Year hardware in 2018. In a league that is now over-populated by elite offensive guards, he can make his mark by slowing down the Kyries and Currys of the NBA. 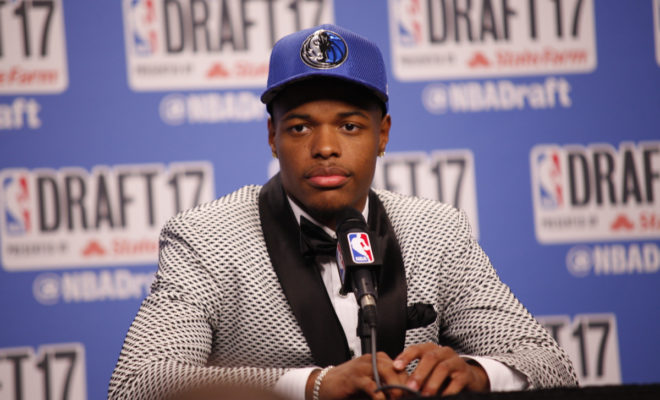 Yes, we have another Point Guard atop this list and for good reason. This was a draft class dominated by them, and if you look at the teams that chose them you’ll see a lot of situations where these athletes will be among the top options on offense.

Now in the case of the Mavs, draft night had to be something of a whirlwind. Sitting in the latter half of the lottery, they were entirely at the mercy of the teams picking ahead of them. Sure the top 2 selections were essentially made before the day began, but beyond that there was no real certainty about where picks might fall.

If you’re anything like me, you probably thought that the next franchise center-piece that the Mavericks would aim for would look and play a little something like their last one, a la Lauri Markkanen (and for all we know he might’ve been their preferred option). But with the Arizona big man off the board at number 9, the Mavs took the best remaining player available, and one who I felt should’ve gone much higher.

Dennis Smith Jr. is pound for pound the best athlete in the draft class. I mean seriously, have you seen this kid’s highlight reel? I literally watched a video of him throwing down a between-the-legs 360 jam about 20 minutes ago. Now you pair him with (ideally) a returning Nerlens Noel, and you have an exciting high-rising inside-out duo for years to come in Dallas.

He’ll likely come in to the big D and assume the starting point guard duties from day one. Additionally he’ll have the consistent mentorship and leadership of one Dirk Nowitzki to guide him through the early days of his career.

The biggest knock against the NC State prodigy is the fact that he doesn’t always seem to give his all. But let’s be honest for a second, on a franchise run by Mark Cuban (for my money the most involved owner in pro sports), Rick Carlisle (a no nonsense kind of coach), and Dirk (the most level headed superstar of all-time)…there’s no way Smith can get away with half-assing even a possession during the season.