I genuinely cannot believe it’s almost September already. I mean seriously, maybe it’s this full-time employment nonsense, but this summer seemed to fly by at an alarmingly quick rate.

Now I don’t know about the rest of you, but I don’t typically use days on a calendar to measure where we are in the year. I look to the world of professional sports, and see where the leagues sit, to determine what time of year it is. Right now we’re looking at:

That’s right my friends, the baseball season is now coming down to crunch time as teams vie for divisional leads, playoff berths, and any late heroics that could potentially salvage an otherwise lost season.

September’s high-stakes typically leads to some of the most exciting baseball you’ll see in the regular season. So consider this something of a guide. A guide to the teams that’ll keep your eyes glued to the television, and your mind constantly on the standings. So without further ado, here are the teams you need to watch on the road to postseason baseball:

This will undoubtedly be the most divisive selection I make here for a lot of you. Some will argue that the Yankees inclusion on this list at all is unwarranted. Their inability to pitch the first 6 innings of a ballgame, coupled with a slew of injuries that are hampering their power-packed lineup, is a deal breaker for a lot of potential viewers. On the flip side, others will say that I’ve totally undersold a team with the second best record in baseball and a still reasonable shot at ending the year with a divisional crown.

After a truly dynamic start to the regular season, the Bronx Bombers have stumbled out of the All-Star Break to the tune of a 16-12 record. Their starting rotation has been abysmal with only sporadic good outings. The offense has been up and down all year, seeming to rise and fall with the swing of Didi Gregorius whose peaks and valleys this season have been something to see in their own right. 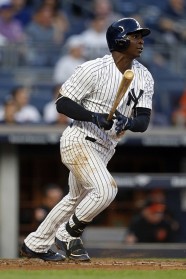 The watchability of the Yanks stems not from what they’re doing now, but rather what awaits for them as we creep into the final month of the baseball season. Aaron Judge’s return, though later than expected, now appears to be just around the corner. Similarly, the injury plagued Gary Sanchez, is due to return relatively soon. With two of their most powerful bats set to rejoin a now scorching hot Giancarlo Stanton in the heart of the order, the Bombers are set to explode in the build up to the playoffs.

Despite the fact that the Boston Red Sox have seemingly not lost a game in the last 3 months, their strong hold on the AL East only measures at 8 games above the Yanks. Should the Yankees manage to up the quantity of quality pitching outings and continue to bash with the best of ’em, then there’s no reason to believe that the fate of the AL East (and top playoff seeding) could come down to the last few days of the regular season, which just so happen to see the Yankees visiting Fenway for 3 games. If that isn’t good television…I don’t know what is…

What a year it’s been for the National League East. The season kicked off with an unprecedented 15-game run by the Mets. The Nationals’ showing flashes of competence but settling into mediocrity despite being the overwhelming divisional favorite entering 2018. The Marlins are shockingly not the worst team in baseball this year.

And then there’s the Braves and Phillies…

A pair of teams who arrived on the doorstep of the playoffs way before anyone had them slated as contenders. These are a pair of bottom-tier teams in 2017 who have managed to climb the rungs back into relevancy overnight. The divisional foes mirror one another in their combination of veteran leadership and youngsters bursting at the seems with talent and potential.Managed by young and relatively inexperienced managers, it’ll make for a good watch to see these two fight for NL East supremacy.

Where this pair of divisional foes becomes much watch television lies in the fact that in all likelihood only one of them will be playing baseball in October. They’re locked in a dead heat for first, only a pair of wins elevating the Braves over the Phillies at the moment. With an onslaught of fellow National League teams locking horns for the two Wild Card berths, there’s no real guarantee that both with see the playoffs. So it is imperative that both organizations duke it out for that top ranking.

OPPONENTS OF NOTE: The Braves & Phillies will face off 7 more times

Here’s a fun fact for you, I had the St. Louis Cardinals as a Wild Card team before the season began. I genuinely had faith that this group of guys (though not ready to usurp the Cubs in the NL Central) had the right combination of talent and baseball know-how to get into the playoff picture.

By the All-Star break though, I was certainly under the impression that the ship had sailed for the Cards. Trailing both the Cubs and Brewers in their division, and watching the contenders in the NL East & West, I assumed that the season was all but lost for the red birds. At one point I was even calling into question their unwillingness to part ways with guys like Dexter Fowler and Matt Carpenter who could conceivably draw solid returns from Playoff teams with a hole to patch up.

Thank god I’m not at the helm of the Cardinals franchise. Following the break, the Cardinals held tight to their core and exploded through August. More specifically, Matt Carpenter exploded through August. The multi-tooled infielder seemingly added a new tool to the arsenal at some point this summer: Power.  Carpenter went from hitting a toxic .140 in Mid-May, to being my pick for NL MVP on the doorstep of September. He has absolutely raked in the latter half of 2018 to the tune of an already career-high 34 round trippers. 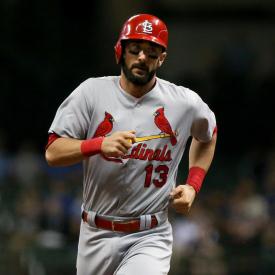 The Cards’ surge has landed them squarely in second place in their division, and has them clinging to the first Wild Card spot. Largely overshadowed by another low-budget organization on the rise in August (we’ll get there), St. Louis has inexplicably managed to turn around their season in a heart beat. For my money they’re one of the most dangerous teams in playoff contention, because their brand of small-ball has become such a foreign art to a league that treasures the 450-foot blast.

Have you guys ever noticed that the Oakland A’s always seem to be at their best when you can’t name a single member of their roster at the start of the season. I mean seriously, take a break from this and go scroll through Oakland’s roster, if you can honestly tell me you knew of even 5 of them I will hand deliver $5 to you.

Aside from just being one of the best baseball movies ever made, Money Ball is also a legitimately solid strategy for a franchise with the same spending capabilities as a 23 year old still living with his mother (wow that hit close to home, pun absolutely intended). This is a team with baseball’s 3rd lowest payroll. 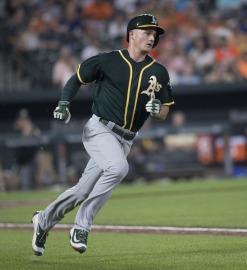 Far more important than their payroll though, is that this is a team with baseball’s 3rd best record. After an above average (and far above expectations) start to the 2018 campaign, they’ve held down Major League Baseball’s best record post All-Star break.

Now they’ve drawn even with the defending World Series Champion, Houston Astros, for the AL West divisional lead. This is a height that truly nobody saw coming for a franchise that has lacked the kind of playoff staying power for the better part of the last 4 decades.

So coming down the home stretch, this gang of nobodies and misfits are trying to go toe-to-toe with one of baseball’s juggernauts. If you’re looking for sports’ David vs Goliath, this is it right here.

This legitimately hurt my chest to type, and this next part might just kill me altogether…

The 2018 Boston Red Sox will go down as one of the greatest teams in the history of the game. Currently on track for 114-Wins, their impeccable play on both sides of the field has put them in a different stratosphere from the rest of Major League Baseball this year. At this point I am wholeheartedly convinced that if this season doesn’t end in a Red Sox World Series Championship, it’ll be remembered in equally infamous company as the Golden State Warriors 73-9 season that ended in a Finals loss.

Boston has two different players who would almost indisputably be the AL MVP in just about any other season in the last two decades. Unfortunately, the odds are that Mookie Betts and J.D. Martinez will inevitably split the vote (a la Blackmon/Arenado in 2017 or Jeter/Teixeira in 2012) and allow a third (potentially less deserving) player to usurp them and snatch the crown.

The entire Sox organization has managed to remain locked in through 127 games, and I wouldn’t dare bet against them continuing that streak. Chris Sale is essentially walking through the finish line of the season as a unanimous Cy Young choice. Alex Cora looks like a freaking genius in his inaugural season as a Major League Manager. Dave Dombrowski has done the impossible, by filling the shoes of his predecessor Theo Epstein almost to a tee. And all of this has essentially been done with the Yankees breathing down their necks for an entire season.

There has literally been no wiggle room for the Red Sox in 2018. Any error could mean catastrophe. Even the occasional 3-game skid which is par for the course in the 162-game MLB season, could result in the Yankees chasing them down. But somehow the Sox have managed to hang on to their dominance atop the AL East, and all of baseball, right up through the dog days of summer.